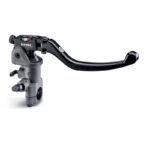 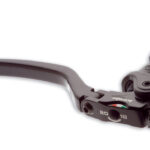 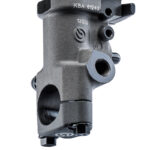 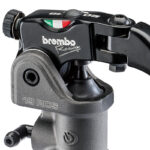 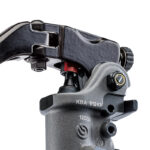 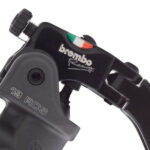 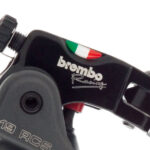 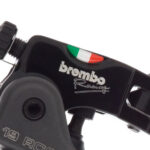 Fits a huge number of motorcycle makes and models. Please check or contact us if you are unsure.

Brembo Radial Master Cylinder has made the history of Racing Brake System, it’s the most used MotoGP or SBK master cylinder and it is the market leader.

For twin disc systems, Brembo common radial master cylinders are 19 x 18 and 19 x 20, and for Nissin is 19×21.
The choice between these models is due to the different feeling that each of them gives to the rider: the 19 x 18 is the extremest version, the shorter wheelbase is preferred by riders who like more power and excellent progressiveness, with a working stroke slightly shorter than the 19×20, the 19 x 20 is the “ready” version, the longer the wheelbase is, the shorter lever runs, as well less power is transferred to the piston.

This new patented device allows to modify the pump lever ratio on two values, 18 or 20 mm, by simply rotation of the eccentric drive placed on the front of the lever drive. By the RCS system – Ratio Click System – it is very easy to pass from one configuration to the other one, modifying the lever ratio to adjust it to the different characteristics of the braking system, of the usage and driving, such as, for ex., the wet or dry conditions, asphalt with more or less grip, circuit with strong braking.
This adjustment is the element missing till now to get the ideal feeling among the rider, the driving style, the bike and the circuit.

NB. The red spot on the eccentric drive identifies position 18mm of the lever ratio, while black indicates position 20mm.

The inner piston, seals, push rod are the same as the majority of the MotoGP and SBK riders use.
Brake master cylinder carries out a crucial job during the braking and the usage of the MotoGP parts guarantee excellent performances in all usage conditions because of the very reduced manufacturing tolerances and of the very good smoothness.
Master cylinder body
The master cylinder body is in aluminium alloy, produced by forging and then CNC (Computer Numerical Control) machined by lightening milling.
Very closed manufacturing tolerances, similar to those used in MotoGP, guarantee the perfect matching with the floating piston due to a working precision never seen. For the superficial finishing it has been chosen the hard anodizing, electrolytic process which converts the surface of aluminium and its alloys into a vary hard oxide coating which guarantees very high resistance to abrasion and corrosion.

The lever is made of two main components: the racing lever drive and the lever itself, folding and manufactured by forging. In the lever joint it has been inserted a patented system which allows the rotation only by the effect of an eventual tumble of the bike, without the possibility of an accidental rotation and getting in this way a bigger dynamic
safety.

The control for the lever distance adjustment from the handlebar has been re-placed and now it is in axis with the lever itself, guaranteeing the assembly of the eventual remote adjuster.
By using this control, the press push rod does not move in respect to the master cylinder body, keeping the best working angle of the push rod. Therefore, either by getting the brake lever closer or farer to the handlebar, the efficiency of the kinematics motion does not change, assuring less friction and lack of scattered forces.
In addition the lever has its fulcrum on the pump body by mean of a bushing/gauged pin system which guarantees high stiffness and better feeling together with a high resistance to wear.

A special housing has been designed for the rear stop light mechanic micro switch, for street usage of the master cylinder. The micro-switch is supplied in the same master cylinder package.
The switch works “normally open” when the lever rests; by pressing the lever it closes the circuit. The switch can not replace a switch that works “normally closed”, such as BMW switches. You can purchase optional switch available in the linked products.

High load springs have been chosen to guarantee the constant contact between the eccentric drive and the push rod; in this way you can avoid wear due to the knocking by the vibrations of the vehicle and an item of further safety is introduced in the transient phase between accelerator release and brake, resulting in an advantageous life increase of the various components.

0 cart
You've just added this product to the cart:
wpDiscuz